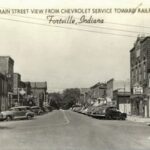 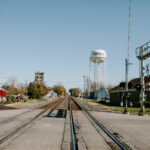 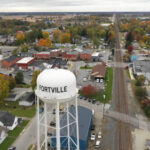 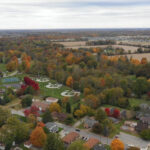 Tribes of Miami and Potawatomi Indians first inhabited the land in the upper northwest corner of Hancock County. One of the first recorded white settlers was Francis Kincade. There were clearly defined roads throughout the area he occupied as early as 1826. He filed a plat of 24 lots in 1834. His property was known as “The Crossroads” because the Greenfield-Noblesville Pike (now SR 238) and Main Street (now SR 36/67) ran through this property.

Thomas R. Noel built and operated a general store and post office at this location for a number of years. This settlement was known as Phoebe Fort. The post office bore the name “Walpole” in honor of Thomas D. Walpole, a prominent attorney and politician in Greenfield.

Cephas Fort made the original plat survey of Fortville on his property in 1849. He anticipated the arrival of the railroad throughout the area and hoped to see it run through his property. The “Bee Line” Railroad (later the New York Central) did exactly that in 1852. The railroad station was named Fortville in honor of Cephas Fort. The town center grew somewhat south and east of its original location as a result. Fortville was officially incorporated in 1865 with a population of 240 inhabitants. The petition was brought before the County Commissioners in September. They designated September 30th as the day to hold the vote. Thirty-six people voted for, and nineteen against, incorporating the Town.

Like other Towns in new territory, development was slow. Streets were without gravel, and the sidewalks were made of sawdust and slabs. Fortville was located in a productive locality, however, and only needed to await the development of the surrounding country to be assured of its own growth. The principal activity of the settlers was to cut down the forest. The lumber was used for homes, a church, a school, and a central business district on Main Street. On small cleared patches, family truck gardens thrived in the rich soil. As cleared land was enlarged, it was developed for grazing, farming, and orchards. The first major crop was flax. The flax mill was located at Main and Broadway and was in operation into the 1920’s. Brothers Thomas and Vance Noel built the first flour mill in 1855. It was considered the largest in the United States with a 100-barrel capacity. Some woodcutters contracted with the railroad for cordwood stacked at convenient locations for the wood burning locomotives. New grain elevators, gristmills, saw mills, craftsmen, merchants, doctors, and druggists kept pace with the Town’s growth.

The first church, the Methodist Episcopal Church, was organized in 1856. The congregation met in an old barn in the north part of Town owned by Peter Staats until 1859 when their building was erected. The name was later changed to St. Thomas in honor of the late Thomas Tobin. The Christian Church of Fortville was organized in 1871, and a building was erected in 1872. Today there are 10 churches in Town. The Fortville Carnegie Public Library was established in 1916. The building was completed in 1918. The building held 15,000 volumes and a circulation of 37,938 books per year. The first school was built in 1857 and was a small frame building with one teacher. The frame building burned in about 1875-1876. After that school, was conducted in the basement of the Methodist Church, over a drug store, in a hotel, or wherever rooms could be found. People demanded a better facility and a more permanent one. Stokes Jackson was a Township Trustee of Vernon Township and in April 1877, agreed to pay one-half of the cost and to join with the Corporation of Fortville in the erection of a $5,000.00 building. The school was finally completed on November 21, 1878, and opened 10 days later to 176 students. The school was conducted jointly for 12 to 15 years after which Fortville assumed full control of her own schools. The current school is located to the south of Town at the intersection of State Road 234 and County Road 200 West.

In 1880, $400.00 was set aside for street improvements. In the 1880’s and 1890’s, improvements came rapidly. Concrete sidewalks were put down, and the Thomas Gardner Road was constructed which gave Fortville its first brick street. The first fire engine was purchased in 1879 and was a hand-engine operated by volunteers. It depended on local wells until the Town water system was installed in 1913. This gravity-fed system installed in March and April, held a cost of $16,849.40. This included a 50,000 gallon tower set 100’ above the Town’s street level. Pipes were laid, and hydrants were installed to protect all areas of Town from fire hazards. The Town bought two two-wheeled carts with 500’ of hose for each cart. During the late 1870’s, coal-oil fired streetlights were introduced into the Town. In 1887, natural gas was discovered in the area, and the Town turned to this new resource to provide lights for their streets. In April 1913, the street lighting was converted to electric power.

Marked improvements were made in 1896. Several plants, which were already established, spent large sums for improvements. Hagen & VanLaningham established a planning mill, and Wisehart & Schafferr an icehouse and storage rooms. Several stories were added to business rooms, fronts improved, etc. about this time. Fortville Memorial Park was established in 1920 when the Town purchased 33 acres from Thomas Noel. A shelter house was erected in 1933 and a Scout Cabin in 1936. Through the years, tables, playground equipment, tennis courts, and a baseball diamond with lighting for night games have been added. Five local newspapers have been published in Fortville. The first, the Fortville Journal, was published for a few months in 1879. A second Fortville Journal followed it in 1883, and then the Fortville Sun was published in 1886. The Fortville Tribune was established in 1893 and was published by different editors until April 1909 when Gus Stewart purchased it. He had previously published the Fortville Reporter for a few months during the fall of 1901. Isaac McConnell of Oxford, Indiana, and Jacob Isely, of Attica, Indiana, organized the Fortville Bank as a private bank in September 1891. Mr. Isely was the president and Mr. McConnell the cashier. In July 1906, the bank was incorporated as a state bank with a paid up capital of $25,000.00. The People’s Bank of Fortville was organized in 1906 by O.L. Morrow. In 1908, it was reorganized as a national bank with a capital stock of $25,000.00.